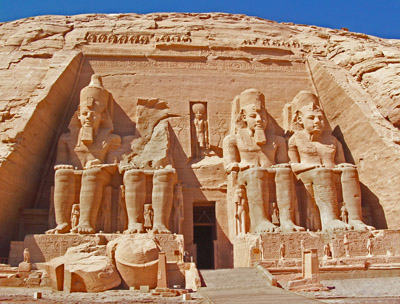 Abu Simbel is the name given to two huge rock temples located in south Egypt about 290 km south west of Aswan. This is an archeological site and it is now registered as a UNESCO World Heritage Site. They are also called the Nubian Monuments. The history of these temples dates back to the 13th century when they were carved out of a mountainside. The entire monument was relocated in 1960 on an artificial hill.

The reason the monuments were shifted is because they were gradually drowning in Lake Nasser. This lake was a huge artificial reservoir that was made by the Nile River and Aswan Dam. The Abu Simbel attracts a lot of tourists every year as it is the most visited spot in Egypt.

The temple took almost 20 years to complete. It is a dedication to three different gods, namely the Ra-horakhty, Ptah and Rameses. The Abu Simbel is considered one of the most beautiful and sacred temples in all of Egypt. Every statue in the temple has Ramesses II on a throne and he is donning the double crown of both the Upper and the Lower Egypt. One of the statues at the entrance once got damaged due to earthquake.

The entire temple is marked as a courtyard and enclosed on the north and south side by walls. The Abu Simbel is known for its beauty, mystery and architectural knowledge. Most of the visitors who are on the expedition to explore Egypt come to visit this Temple.