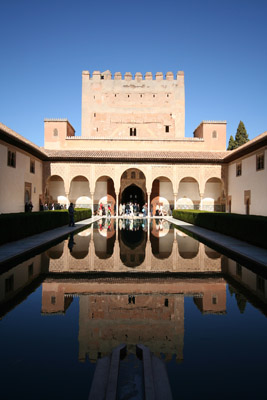 View of Alhambra and its reflection on the poor
Photo by: clspeace, Creative Commons

The Alhambra is a palace and fortress located in Granada, Spain. The entire fortress is made up of red clay. The fort is very complex in its architecture. It was built by Moorish who was a ruler in Southern Spain. The Fortress was made on a hilly terrain on the southeast side of the city. Today, the Alhambra is one of the main tourist attractions of Spain. Many years ago it was known to be a residential place of the Muslim rulers. It has some very intrinsic and beautiful Islamic architecture.

The total length of the Alhambra is 740 meters. The strongest walls are at the citadel. Other than the west side of the Alhambra, all the other walls are weak. In total, there are thirteen towers. A river divides the Granada Valley and the Alhambra Park runs parallel to the Monte Mauror.

The Alhambra is a true reflection of the ruler Nasrid Emirate of Granada. A lot of people have used this place as a refuge. This site has a very complex mix of both the natural and manmade features that are worth visiting for. The structure itself reflects the craftsmanship of Muslims.