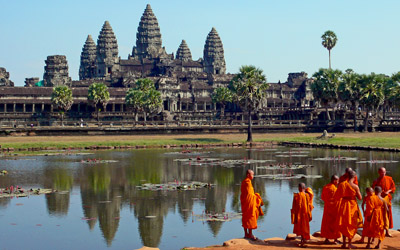 Built in the early 1100’s by the Khmer King Suryavarman II, the temples at Angkor represent one of the most advanced architectural achievements in relation to its time. The temple was originally dedicated to the Hindu god, Vishnu, but later became a site for practitioners of Buddhism. Today, the site is a major tourist location, pulling in upwards of 600,000 foreigners every year. Efforts to preserve and restore the temple have been ongoing since the 1980’s and various countries have made efforts to protect the site including, the U.S., France, Germany, and Japan.

Conflicting theories exist in relation to the temple’s purpose. Unlike most of the other temples in the area, Angkor Wat’s main entrance faces westward. This has led some historians to believe that the temple was actually built as a funerary site for Suryavarman II. However, others reason that the temple faces west because the Hindu god, Veshnu, was affiliated with that direction. Regardless of the site’s purpose, though, it is agreed that Angkor Wat was once one of the largest cities in the world, and that it combined secularism and spiritualism.

Angkor Wat was built early in 1100s by Suryavarman II over an estimated 30 year period. It honors Vishnu, and the ruins are a symbolic structure of Hindu cosmology. The temple is located about 4 miles to the north of Siem Reap and south of Angkor Thom, its only accessible entrance through the gate to the west.

Angkor Wat is one of the largest religious sites in the world, covering around 500 acres of land. Its five walls and moats are a representation of mountainous chains, as well as the cosmic ocean. The vast compound’s short dimensions are aligned precisely along the north-south axis, and the east to west axis was diverted deliberately 0.75° to give its observers an anticipation of the equinox in spring for three days. 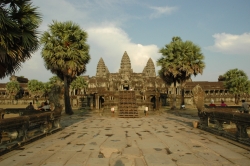 Moat View of the Angkor Wat
Photo by: jurvetson 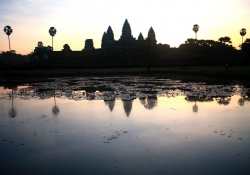 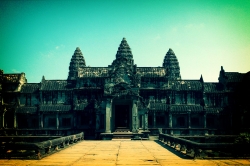 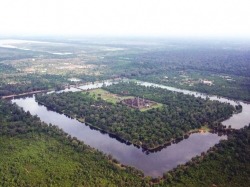 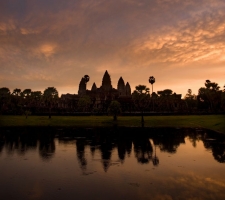 Beautiful View of the Sky and the Reflected Shadow
Photo by: inottawa 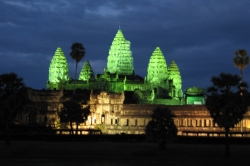 Light Up at Night
Photo by: mckaysavage 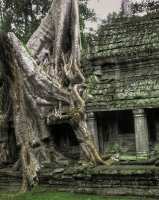 How Old Is This Tree/
Photo by: alfaneque 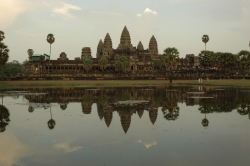 Angkor Wat Reflected in The Clear Water
Photo by: cornstaruk 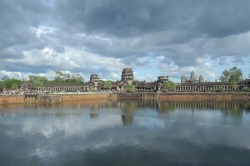 Another Angle of Angkor Wat
Photo by: visualcuriosity

How Can This Tree Survive?
Photo by: Augapfel 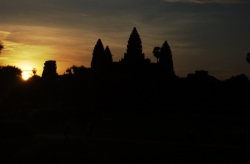 Sunset, Too Dark To See Anything
Photo by: James Khoo 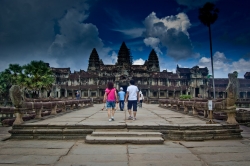 Nice View of the Temple, Too Much Tourists Though
Photo by: gumuz 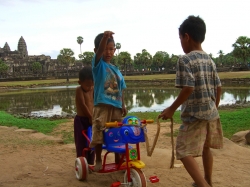 What is That Kid Pointing At?
Photo by: permanently scatterbrained 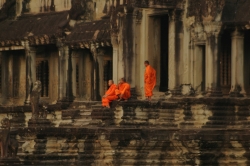 These Monks Have Nothing to Do?
Photo by: beggs

Viewed From the Northwest
Photo by: WikiCommons 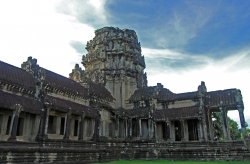 Another Section of the Angkor Wat
Photo by: jenniferphoon 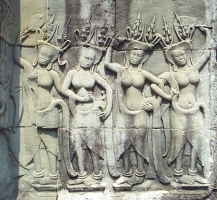 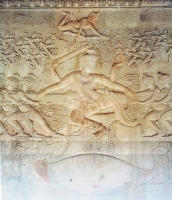 The Bas Relief of the Churning of the Sea
Photo by: WikiCommons 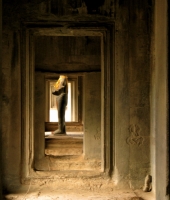 Who Stole The Buddha's Head?
Photo by: mckaysavage 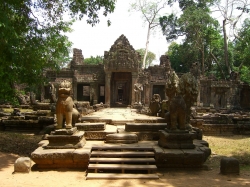 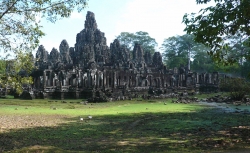 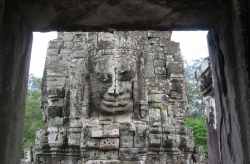 Who is He Smiling At? Found At Bayon Temple, Angkor Thom
Photo by: The Wandering Angel
Angkor Wat Temple, Asia, Cambodia