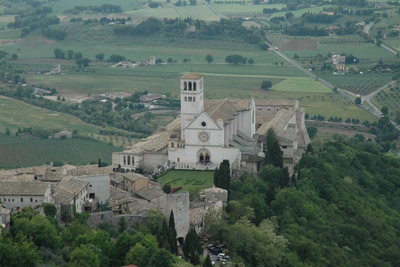 Basilica of St Francis in Assisi, Italy
Photo by: Beyond Forgetting, Creative Commons

Assisi is a small city located in Umbria, Italy. UNESCO listed the Basilica of San Francesco d’Assisi as a world heritage site. Assisi city is a famous tourist destination. The nightclubs and pubs are a special attraction here and a wide variety of wine is available from them. When shopping in the Assisi streets, you will find that it has a wide collection of brands to choose from. Assisi is famous for its fish restaurants, where a wide variety of fish are available because of the good fishing at Lake Trasimene. The fish dishes that are cooked over the fire and as soups available here, are made from several species of fish and are considered a highlight of the city. The world’s best white wine and olive oil are from the area near Lake Trasimene.

Assisi is the birthplace of St. Francis , who was born in 1182 and was the founder Franciscan order. Assisi is famous for the “Basilica di San Francesco”, which was built in the 13th century. The church contains St. Francis' relics and also some paintings describing his life. During Pope Pius II's rule (1458-1464), Assisi was under his authority. In 1997, massive earthquakes hit Assisi, causing huge damage to historical structures located there. The restoration was done quickly, in fact the Basilica di San Francesco, was reopened within a period of two years.

Assisi is well known for its architectural churches, which are listed below.

Assisi has a great scenic beauty and a delicious selection of seafood is available there. This is a great travel destination because it is a wonderful place to find recreation and relaxation.