There are countless aquariums throughout the United States that can be fun for the whole family to visit. Yet, there are some aquariums that go above and beyond in trying to educate, entertain and amaze guests. From dolphin shows to massive whale sharks and underwater tunnels to interactive exhibits, these are hands down some of the best aquariums in the United States. 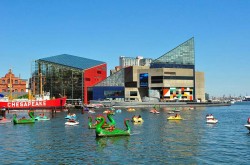 The National Aquarium in Baltimore, Maryland is a public, non-profit aquarium that has annual attendance numbers of over 1.5 million people. The aquarium has many educational goals, including: disseminating information about issues affecting aquatic habitats around the world and teaching about scientific topics and conservation. The Ausralia: Wild Extremes portion of the aquarium previously won the Association of Zoos and Aquariums “Best Exhibit” award. The newest addition to this aquarium is Blacktip Reef. It is an Indo-Pacific ocean exhibit with many species, such as: the green sea turtle, zebra sharks, blacktip reef sharks, wobbegong sharks and whiptail rays. There is also a dolphin show, 4-D immersion films, an Atlantic coral reef, a jellyfish tank, a ring-shaped shark tank that encircles guests and much more. 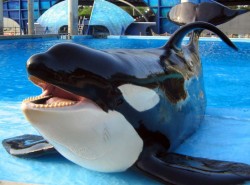 SeaWorld is a unique combination of a theme park and an aquarium. There are thrill rides to enjoy, but there are even more sea creature related shows and exhibits to take in. Perhaps the most famous attraction at SeaWorld is the Shamu killer whale show. Another show at the park is “Blue Horizons,” which lets guests see dolphins and birds do various tricks. Sea Lions Live features a lot of comedy mixed with tricks featuring two sea lions named Clyde and Seamore. Other exhibits in the park include Turtle Reef, Shark Encounter, Dolphin Point, Penguin Encounter, World of the Sea Aquarium, Wild Arctic, Pacific Point, Freshwater Aquarium, California Tide Pool and Aquarium de la Mer. Other animals that can be found at the park are Pacific walruses, Beluga whales and even polar bears. 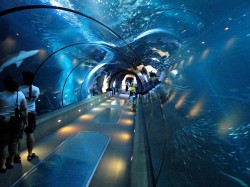 When the Shedd Aquarium opened in 1930 it was the biggest indoor aquarium in the world. The aquarium’s exhibits contain a total of 5,000,000 gallons of water. This was also the first non-coastal aquarium to have a permanent collection of saltwater fish. This location attracts over 2 million guests every year who come to see the beautiful and educational exhibits. The Shedd Aquarium has been the three time recipient of the Association of Zoos and Aquariums “Best Exhibit” award for its Wild Reef, Amazon Rising and Seahorse Symphony exhibits. Other attractions include a jellyfish tank, Caribbean Reef and an Aquatic Show in which visitors can see dolphins, sea lions, beluga whales, hawks and penguins. 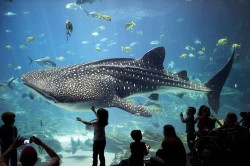 When it opened back in 2005, the Georgia Aquarium was the largest in the world. It holds over 8,500,000 gallons of water, 120,000 animals and more than 500 species. This location is home to four whale sharks, which are the biggest known species of fish in the world. Whale sharks have been known to grow up to 46 feet in length and weigh more than 47,000 pounds and this is the only place in the hemisphere where they are kept in captivity. The aquarium also has beluga whales, manta rays and bottlenose dolphins. There are six areas to explore that each represent a different aquatic environment. They are: Dolphin Tales, Georgia Explorer, Ocean Voyager, Tropical Diver, Cold Water Quest and River Scout. The Georgia Aquarium also works with the University of Georgia, Georgia Tech and Georgia State University to protect endangered species and provide research and education programs. 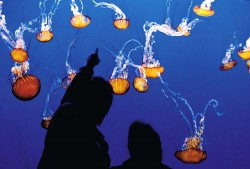 Opened in 1984, the Monterey Bay Aquarium has over 1.8 million guests come through the doors each year. The building has a series of pumps and pipes that circulate fresh ocean water for the animals from Monterey Bay. This location was the first of any place on the globe to grow California Giant Kelp. The largest tank holds 1,200,000 gallons of water and has one of the biggest single-paned windows in the world. The aquarium is one of only a handful of locations to have ocean sunfish on display. These fish are the heaviest discovered bony fish in existence, weighing an average of 2,200 pounds. Visitors can also see other creatures, such as sea otters, jellyfish, stingrays, yellowfin and bluefin tuna, penguins, seahorses and much more. From time to time the aquarium has great white sharks in captivity for guests to view. In the future, the aquarium plans to open up a new octopus exhibit. 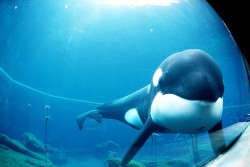 Operating since 1992 right next to the Yaquina Bay by the Pacific Ocean, Oregon Coast Aquarium used to be the home of Keiko, the orca that was used in the film “Free Willy.” The biggest, and arguably, most popular exhibit at this aquarium is called “Passages of the Deep.” It is a series of underwater tubular walkways that guests can venture through as they are surrounded by rockfish, stingrays, sharks, halibut, cod, salmon and countless other sea creatures. Another interesting feature of this aquarium is the “Seabird Aviary” which displays Black Oystercatchers, Rhinoceros Auklets, Pigeon Guillemots, the Common Murre and the Tufted Puffin. There are also outdoor exhibits with many mammals for guests to see, such as sea lions, seals and sea otters. The aquarium also hosts many temporary exhibits that spotlight different creatures like crabs, the green-blooded cuttlefish and the flashlight fish. 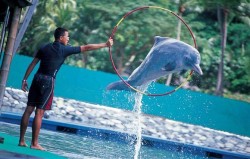 This aquarium is located near the Gulf of Mexico and has a strong goal of promoting conservationism as well as rehabilitation of animals that live in the region. There are twelve main themed areas in the aquarium, each focusing on different types of environments and animals. Two dolphins named Kai and Shadow are on site and shows are performed three or four times a day. There are rare birds at the aquarium, including raptors and bald eagles. The aquarium also houses jellyfish, sea nettle, tarpon, cownose stingrays, green moray eels, crabs, urchins, river otters, sea turtles and even an alligator named Bo. The aquarium has both indoor and outdoor exhibits. One outdoor pool holds more than 30 stingrays that guests are allowed to touch and feed. The Texas State Aquarium offers a rare chance to be a “Dolphin Trainer” for a day. For $250 you get to spend four hours learning how to work with dolphins, swim with them and even be in one of the dolphin shows. 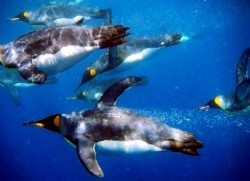 The largest exhibit at Ripley’s Aquarium of the Smokies is Shark Lagoon. If you get to the aquarium by 9:30 in the morning you will have the opportunity to watch divers interact with nurse sharks, sandtiger sharks, tarpon, sea turtles and other sea creatures as they also perform maintenance and cleaning in the giant tank. The aquarium provides different events every thirty minutes which include penguin feeding, a stingray bay dive, marine science class, a penguin facts event and a coral reef dive. The Tropical Rainforest section of the aquarium features piranhas, poison dart frogs, four-eyed fish, armored catfish, iguanas and more. The Coral Reef exhibit is the most colorful feature at the aquarium with its clownfish, Moorish idols, foxface rabbitfish and regal blue tangs. The aquarium also has a large penguin exhibit that guests can experience by crawling through clear tunnels that let you get up close to the birds. One tunnel even leads you directly into the middle of their manmade beach. 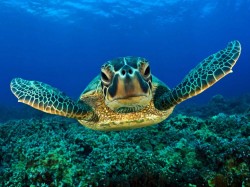 Opened in May of 2000, the South Carolina Aquarium is divided into sections that represent the different regions of South Carolina. It has a two story, 385,000 gallon tank that holds over 300 species which is called the Great Ocean Tank. This tank was designed to mimic deeper water reefs. Some of the inhabitants include pufferfish, a 220 pound loggerhead sea turtle, sandtiger sharks, surgeonfish and more. Other animal highlights at the aquarium are the great blue heron, megalodon sharks, nurse sharks, river otters, the American alligator and octopus. This location also has a touch tank where guests can interact with sea urchins, horseshoe crabs, Atlantic stingrays and hermit crabs. The aquarium is home to a sea turtle rescue program which educates guests about the Loggerhead sea turtle. There is actually a hospital attached to the aquarium that specializes in rehabilitating injured turtles. Guests can take a tour of this hospital during certain days and hours.

The main goal of the North Carolina Aquarium is to teach visitors about Cape Fear’s plant and animal life. The first exhibit you will see when entering the aquarium is the Cape Fear Conservatory. Here you will get to take in views of freshwater animals like catfish, snakes, frogs and box turtles living among streams and swamps. Another unique feature at the aquarium is the albino alligator exhibit where you can view Luna the alligator; one of only a handful of known albino alligators in the world. Other exhibits portray reef and ocean habitats representing offshore North Carolina. Animals here include octopus, pufferfish, stingrays, groupers, sharks and moray eels. The aquarium has two touch pools where guests can pet a live bamboo shark and interact with crabs. Finally, the Pacific Reef Display has beautiful giant clams, corals, cardinalfish, clownfish, surgeonfish and sea anemones for your viewing pleasure.

One thought on “Best Aquariums in the United States”