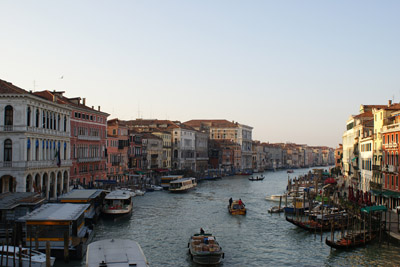 View of the Grand Canal from the Rialto in Venice, Italy
Photo by: keepwaddling1, Creative Commons
View Larger Map

The beautiful city of Venice is surrounded by water and is located in northern Italy. The capital of Venice is Veneto. It is commonly known as the city of lovers, the city of water or the city of bridges. It is spread over 118 Islands. Venice is very famous in the world because of its numerous canals.

The city has a total of 150 canals and the most important canal in Venice is called the Grand Canal. It is responsible for managing the traffic in water by corridor management. Rather than visiting areas of Venice by car, it is very common to find water buses and water taxis that are used for transportation.

During the day time, the city is very crowded with visitors all across the world trying to experience what the city has to offer. Narrow yet beautiful canals, bridges and streets give a very different feel than many other places.

Motor boats are not allowed to travel in small canals that are narrow. The city has almost 400 bridges and the Grand Canal cuts the city equally into two proportionate halves from the north to the south. The total length of the Grand Canal is three kilometers. One of the constant threats that the city is the weakening infrastructure of the buildings.

5 thoughts on “Canals of Venice”