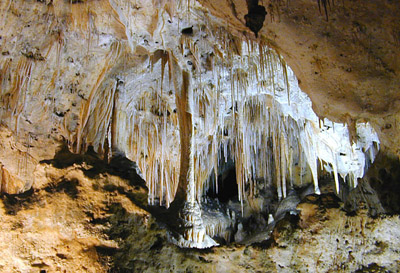 Carlsbad Caverns National Park is located in the southeast region of New Mexico in the United States. It is open to the public every day of the year except December 25, but its most frequented day is July 4th every year. Tourists can enter through the natural entrance and hike by themselves to explore the cave or they can go through one of the other two entries. One entry is located in the Rattlesnake Springs Historic District and the other is in the Cacesern Historic District.

Jim White discovered the Carlsbad Caverns, and he gave some of the rooms their names, including the Big Room, King’s Palace, New Mexico Room, Papoose Room, Queen’s Chamber, and Green Lake Room. He also named other important formations, including Totem Pole, Giant Dome, Witch’s Finger, Bottomless Pit, Iceberg Rock, Fairyland, Temple of the Sun, and Rock of Ages. There are many natural and untapped features present in Carlsbad Caverns. There are several chambers in the cave that have white stalagmites which resembled angels to the room’s discoverers. There are also 17 different species of bats that live within the park.

The most famous part of this National Park is the show cave, which is open to the public and tourists can hike by themselves via the natural entrance. One can also take the elevator that goes to the Underground Lunchroom which is 230 meters (750 ft) beneath ground level.

Out of the entire park, almost two-third has been restored in terms of its habitat and no further change will be allowed under any circumstance.

Located in the ceiling above the main entrance hall, this small room was first accessed by tying a rope to a bunch of balloons and floating them up into the passage.

A large, unadorned rocky passage connected to the main entrance corridor that was mined for bat guano in the early 20th century. The majority of the cave’s bat population lives in this portion of the cave.

This room was named for a long, narrow stalactite coming through a hole in the ceiling that resembles the rope attached to a church bell. This room is located at the end of the Left Hand Tunnel.

Discovered in 1982, this area is located in the ceiling above Lake of the Clouds. Its name refers to a Norse myth about a world in the sky that was accessed from Earth by a rainbow. The room was given this name because of its location above the Lake of the Clouds and its colorful oxide-stained formations.

Big Room or The Hall of the Giants

With a maze of small passages totaling nearly a mile in combined length, this area was discovered in 1993 above a mud-filled pit in the New Mexico Room known as Chocolate Drop.

The uppermost of the “Scenic Rooms,” this is named for a deep, malachite-colored pool in the corner of the room. In the 1940s, when the military was testing the feasibility of Carlsbad Caverns as an emergency fallout shelter, the Green Lake was used to look for ripples caused by a nuclear bomb test many miles away. None appeared.

Discovered by a park ranger in 1966, this is the second largest room in Carlsbad Caverns. It is known for its dense collection of “soda straw” stalactites.

Hall of the White Giant

The first of four chambers in a wing known as the “scenic rooms,” King’s Palace is named for a large castle-like formation in the center of the room.

Lake of the Clouds

This is the lowest known point in the cave. It is located in a side passage off the Left Hand Tunnel. It is named for its large lake containing globular, cloud-like rock formations that formed under water when the lake level was much higher.

This tunnel is a long, straight passage marked by deep fissures in the floor. These fissures are not known to lead anywhere. The Left Hand Tunnel leads to the Lake of the Clouds and the Bell Cord Room.

This room is a small area located in the lower part of the cave. It is named for a mysterious and unexplained noise heard only in this room.

Accessed by means of a short slope, the New Mexico Room is located adjacent to the Queen’s Chamber.

New discoveries are still being made in this section which is described as having fissures east of the White Giant formation. It also parallels the Bat Cave.

This room is situated between the King’s Palace and Queen’s Chamber.

Widely regarded as the most beautiful and scenic area of the cave, this is the room where Jim White’s lantern went out while exploring the caverns. He was in the dark for over a half hour.

Located in the ceiling of the Big Room, this area is filled with white stalagmites that resembled angels to the room’s discoverers.

This is a room located in the Lower Cave where the floor is coated with gypsum dust.

As one of the larger rooms in Lower Cave, a large number of cave pearls are found in this area.

Located in the Big Room at the head of the Left Hand Tunnel, this section contains a cafeteria that was built in the 1950s. It is also where the elevators from the visitor center exit into the cave.