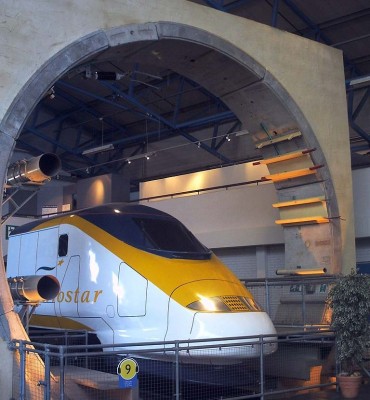 One of the most notable engineering wonders on the planet is the Channel Tunnel. Often known as The Chunnel or the Euro Tunnel, Channel Tunnel was constructed as a railway line that runs through a tunnel that lies beneath the water of the English Channel. It connects the island of Great Britain with the mainland in France. This tunnel is considered one of the most wonderful engineering feats of the 20th century. It officially opened on May 6th, 1994.

It is quite interesting to note that the tunnel actually consists of 3 tunnels: 2 to carry Eurostar passenger trains and a smaller service tunnel. It takes approximately 35 minutes for the train to travel from one terminal to the other.

Channel Tunnel is 31.35 miles long. The running tunnels through which the Eurostar trains run have a diameter of 24 feet. Channel Tunnel was constructed from both terminals using 11 tunnel boring machines, each weighing about 15,000 tons. Tunnel boring machines were used to drill through chalk in order to construct the 2 running tunnels and one service tunnel at the rate of 15 feet per hour.

The total amount that was to be spent in the construction was estimated at $3.6 billion, but upon completion of this amazing project, over $15 billion had been used. At the crest of the construction, 15,000 people were employed with an estimated daily expenditure of about $3 million daily. Unfortunately, 10 workers died during the construction process.

Spoil was a termed used to describe chalk chunks removed by the boring tunnel machines. The British made a choice to dispose their portion in the sea. Since the chunks were piled much higher than sea level, this resulted in the creation of 73 acres of land. The French were afraid of spoiling their nearby Shakespeare Cliff, so instead they choose to dump it near the cliff, creating a small hill that was landscaped later.

A fire erupted on November 18th, 1996 in Channel Tunnel as the Eurostar train was racing through the southern tunnel. The corridor was filled with smoke and the majority of passengers were overwhelmed with fumes. Fortunately, they were all rescued after 20 minutes, but this fire continued to rage. It ended up damaging both the tunnel and the train before it was completely put out.