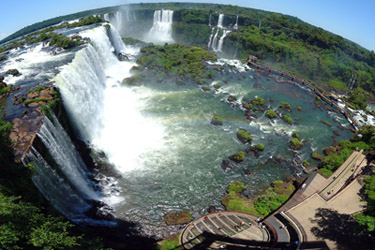 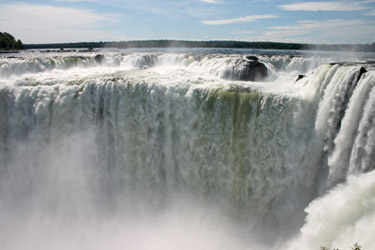 Iguazu Falls, also known as Iguassu or Iguaçu Falls, are situated on the border of Argentina and Brazil. They touch the Parana region in Brazil and the Misione region from Argentina. The falls separate the river into upper and lower Iguassu. The first person to discover the place was a Spanish conquistador named Alvar Nunez Cabeza de Vaca in 1541. It was rediscovered by Boselie during the end of the 19th century.

The Iguaçu have a total of 275 falls and are 2.7 kilometers long. Some of the falls have a height of 269 feet. About half of the river flows into a chasm known as The Devil’s Throat. This particular waterfall is U-shaped, 82 meters high, 150 meters wide, and 700 meters long. Iguazu Falls divide the two countries and more than two thirds of the falls lie in the Argentine Province.

It is said that ten days must be allotted to cover all the falls and do justice to the place. Since the falls are not evenly divided between the countries, enough time must be given to both the countries. The tourists can reach the falls from either the Brazil Province or the Argentine Province. The national park of Brazil and Argentine are now a part of the UNESCO, world heritage site.