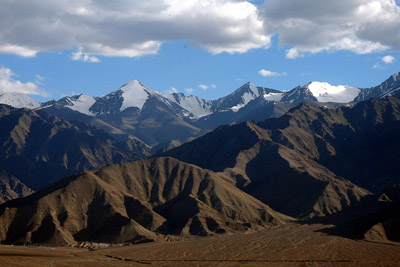 View of the mountains at Ladakh, India
Photo by: ReefRaff, Creative Commons

Ladakh, also called the “Land of the High Passes,” is part of the Indian State of Jammu and Kashmir. It lies in between two of the world’s greatest mountain ranges, the Himalayan and the Karakorum ranges. The people who live here are migrants from the Indo-Aryan and Tibetan civilizations.

The Ladakh region is very thinly populated. It has an altitude ranging from 9,000 feet at Kargil to 21,170 feet at Saser Kanri. The temperature in winter reaches negative 22 degrees Celsius, and during summers it can go up to 20 Celsius. Ladakh has been said to be one of the few places where people can have sun stroke as well as frostbite at the same time.

Water is always scarce because the region hardly receives any rain. Ladakh does not receive rain for over 300 days in a year. The main source of water here is the melted water from the snow which is carried down by smaller streams.

There are beautiful mountains all over Ladakh and it is worth visiting if you are into mountain activities. Some of the adventures that tourists can indulge into are mountain climbing, cycling, Jeep and yak safaris and trekking. Additionally, there are a lot of monasteries in Ladakh that are worth visiting.

2 thoughts on “Ladakh and Its Mountains”