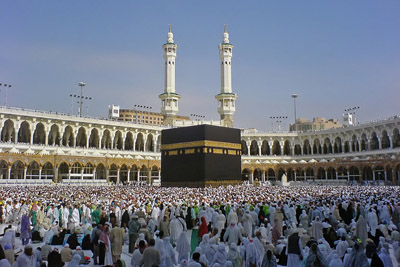 Pilgrims circumambulating the Kaaba during the Hajj in Mecca
Photo by: Muhammad Mahdi Karim, Creative Commons

Mecca, also called Makkah, is a city in Saudi Arabia. It is the holiest city in Islam and is considered to be very sacred to Muslims. Muslims believe that it is very important to visit Mecca at least once in their lives. It is very interesting to note that almost three million Muslims pay visit to this city every year. Today Mecca is dealing with both positive and negative issues. It is still very popular for tourism, but it is having hard times dealing with infrastructure problems.

Mecca is the home of Masjid Al Haram. This is the world’s largest mosque. Initially, it was a place for trading during the 7th century. Also, till 1924, it was governed by the local sheriffs. After that, it saw a lot of modernization and growth in its size and structure. Today, it is ruled by the local municipality of Mecca by a Mayor who is directly appointed by the Government of Saudi Arabia.

The history of Mecca dates back to 2000 BC. Some people believe that Abraham built the Kaaba with his son, Ishmael. Over the years, this place had almost 360 idols. Mecca today has the biggest Mosque in the world. Every day, daily prayers are offered in it and another step is being taken by the government to renovate the entire place so that it can accommodate 900,000 people at a time. By Saudi law, non-Muslims are forbidden to enter Mecca, which is strictly enforced by the government.

19 thoughts on “Mecca, the Holiest City in Islam”