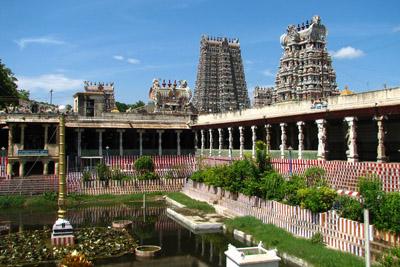 The Golden Lotus tank within the sprawling complex of the Sri Meenakshi
Photo from: mckaysavage, Creative Commons

The Meenakshi Temple is one of the most popular and important temples of the Hindus. The Temple is situated in the middle of Madurai city in Tamil Nadu, India. On a daily basis, thousands of pilgrims pay visit to the temple. The Meenakshi temple stands as the landmark of the city. The 14 gateway towers, called Gopurams, are more than 50 feet tall and have images and colorful statues of gods, goddesses, animals and various mythological characters.

The Meenakshi temple has four different entrances and the complex covers about 45 acres. The Parvati Hut is a part of the temple where only women can enter and men are not allowed to go in. It also has a museum called the Art Gallery, which is full of brass and stone artifacts.

During the pre-Christian era, the temple was built by Kilasekara Pandya. After a long time, it was rebuilt again by Trimalai Nayak. The city of Madurai was ruled by Nayak from the 14th to the 18th century. The temple is spectacular with some of the best architecture found in any temple. It has four towers, the north, south, east and west tower. All of them have nine stories with the tallest tower standing at over 170 feet. The temple is dedicated to lord Shiva and his wife Parvati, also known as Meenakshi.

4 thoughts on “Meenakshi Temple in Madurai”