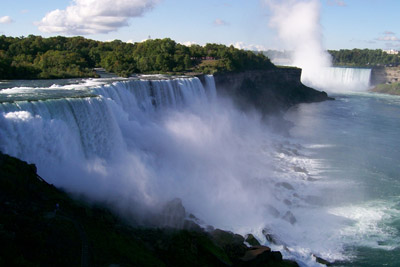 Picture of Niagara Falls from the official observation tower in USA

The Niagara Falls along the border of the United States and Canada is made up of three smaller falls – the Horseshoe Falls, American Falls and the Bridal Veil Falls. The Horseshoe Falls, which is located on the Canadian side, is one often referred to as the most attractive of the three and is named for its unique horseshoe shape. The American Falls is a little less impressive than the Horseshoe Falls as it has almost nine times less water in it and that is way it is not very striking to see. The Bridal Veil Falls is even thinner than the American Falls, but the mist that surrounds it gives it a look of the veil of a newly wedded bride.

The falls cover the international border between Ontario Province of Canada and the State of New York. The Niagara Falls is 27 km (17 miles) long from the north to the northwest of Buffalo, New York, and 120 km (75 miles) long from south to southeast of Ontario. Niagara Falls is known both for its beauty as well as the source of much hydraulic power. As such, balancing out both the commercial and industrial usage of the falls has proven very challenging for engineers.

Some of the main tourist attractions around the Niagara Falls include the Maid of the Mist (boat cruise), Journey Behind the Falls (platform and tunnels below the falls), Illumination of the Falls, Observation Tours and the Imax Theater that gives an educational tour of the falls. Most visitors come to Niagara Falls during the summer due to its daytime and evening attractions. 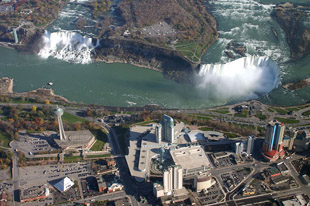 Aerial view of Niagara Falls at 3,500 feet above
Photo by: Duke, Creative Commons 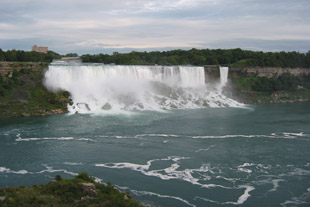 20 thoughts on “Niagara Falls between Canada & The United States”