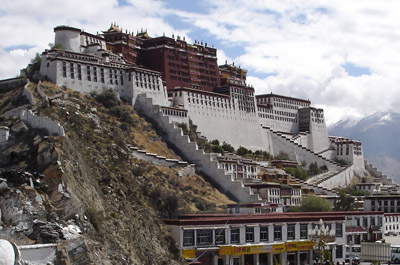 The Potala palace in Lhasa, Tibet is located on what is called the Red Hill and was built by King Songtsen Gampo during the seventh century. It was struck by lightning and devastated by war which led to its destruction. However, the fifth Dalai Lama, in 1645, rebuilt the palace again. Since then, it has become the political center of Tibet. The Potala Palace actually has two palaces in it, the Red and the White Palace. The red one signifies religion and the white one is a ministerial building. This place is known for its complex construction, huge buildings, peaceful atmosphere and numerous works of art.

Once you enter the palace from the east. It takes you to the main courtyard where the Dalai Lama used to watch the Tibetan Opera. The White Palace was called the Winter Palace and the white color signified peace, calmness and togetherness. The largest hall in the White Palace is on the fourth floor, the living quarters and the offices are on the fifth floor. The Potala Palace has a beautiful Balcony that faces Lhasa.

The Red Palace exists in the middle of the Potala Palace and after the fifth Dalai Lama died, it was painted in a red color that signifies power and dignity. The walls of the Red Palace have many Buddhists stories written on them. It has three chapels. The North chapel is dedicated to the Dali lama, Buddha and his medicines. The East chapel is dedicated to the Indian monk who introduced Buddhism in Tibet. The West chapel is said to be the most luxurious chapel as it has 3,000 kg of gold and foil with hundreds and thousands of gems and pearls.

3 thoughts on “Potala Palace at Lhasa”