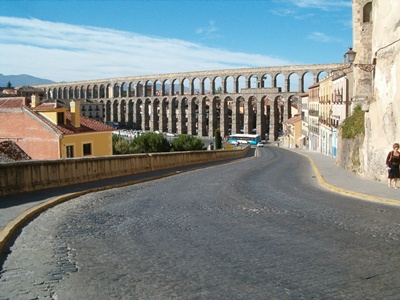 The Aqueduct of Segovia is one of Segovia’s important symbols, it can also be seen in the Segovia city’s coat of arms. The aqueducts are located on the Iberian Peninsula and is a part of UNESCO World Heritage Site.

The aqueducts served as the water source for city of Segovia. It transported water from the River Fuente Fria, 17 kilometers from the city. The water traveled about 15 kilometers before entering into the city and later it was stored in a massive tank known as “Big House”. At this period the Segovia Alcazar was built. The highest point in the aqueduct measures a maximum height of 28.5 meters where 3 meters comprises of the foundation. It features 44 double arches, 75 single arches and another four single arches with a total of 167 arches.

The aqueducts are a major architectural landmark in the city. It continues to function to the present day, in good condition and well preserved.