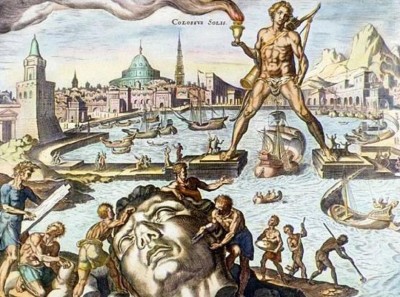 The Colossus of Rhodes was a 98 foot high statue which towered over the Greek Island of Rhodes. The Ancient Wonder was completed around 280 BC. It was erected to celebrate victory over the army of Cypress which attempted a siege of Rhodes in 305 BC. The city was able to withstand the siege of 40,000 soldiers.

After several failed attempts to gain access to the well defended city, by both land and sea, the invading army left, abandoning their equipment. The sale of this equipment provided the money for the people of Rhodes to construct the Colossus.

The Colossus was a massive statue dedicated to the Greek Titan, Helios. In Greek mythology Helios was the sun god. He is said to ride a chariot of the sun around the Earth. Homer believed that the chariot was pulled by four solar steeds.

The Colossus was cast in Bronze by the great Greek sculptor Chares of Lindos. It is widely believed that he died shortly before the completion of his greatest work. Some historians believe that he committed suicide. One such record states that he killed himself due to the shame caused by a minor flaw in the statue although this is dismissed by many historians as just a myth.

Destruction of the Colossus

Although the Colossus of Rhodes was a major tourist attraction for over 900 years, the beginning of its destruction began far earlier, when it was just 56 years old. A massive earthquake hit Rhodes in 226 BC which broke the Colossus at the ankles and left it toppled on the ground. At the time some people wanted to repair and rebuild the Colossus but others took the view that its construction had angered the gods who had chosen to destroy it.

It is likely that the deaths caused by the earthquake would have been attributed to the anger of the gods and contributed to the decision to leave it in place on the ground, where the gods wanted it. The Colossus was seen as a symbol of great power and human achievement. Thus, its destruction in a matter of seconds in a mighty earthquake would have been very frightening for the people of Rhodes.

The Colossus lay in place for nearly 900 years until Rhodes was invaded by Muslim armies. Several accounts give credence to the idea that it was salvaged for scrap at this time.

There has been a lot of talk of a new version of the Colossus of Rhodes to be rebuilt on the same site which would become a major international tourist attraction. The most recent project idea is to build a massive 328 foot light installation on the site as a modern version of the Colossus. This project is in the planning stage and requires an estimated 200 million euros to complete. It is still hoped that a new Colossus of Rhodes will become a reality in the future.