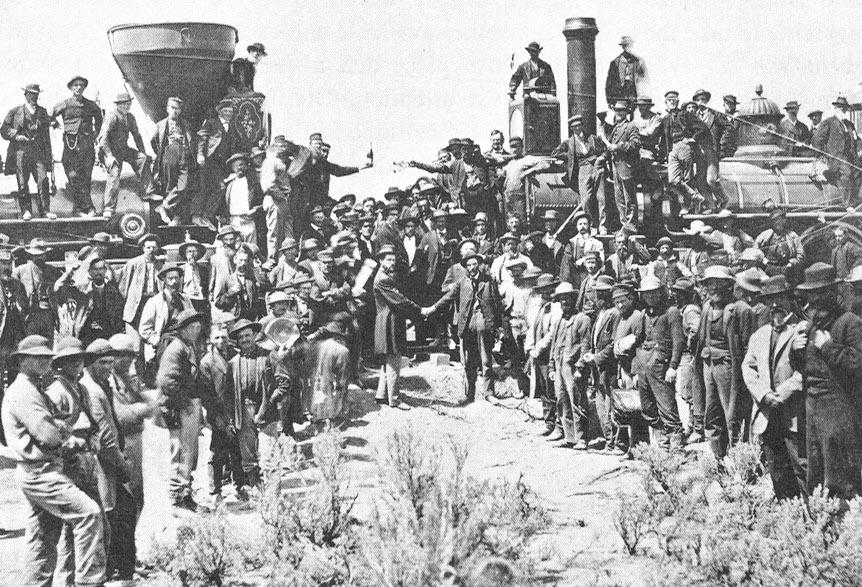 ► More 7 Wonders of the Industrial World

It would be difficult to underestimate the significance of the First Transcontinental Railroad which joined the American East Coast to the West Coast. This feat was accomplished in 1889, and can easily be ranked along with the moon landing or the building of the atomic bomb in terms of monumental technological achievements.

Establishing the First Transcontinental Railroad meant that the United States was one cohesive nation in material reality for the first time. The building of this railroad had economic and social consequences that are almost too far reaching to express fully. Not only did having a coast-to-coast railroad super charge the economy of the United States, but the psychological and sociological impact on the nation was enormous.

The First Transcontinental Railroad project was authorized by the Pacific Railroad Acts of 1862 and 1864, a time when the United States was suffering through the brutal agony of the bloody Civil War. Congress was still looking forward at this time, and even contemplating this gigantic engineering feat while embroiled in war, is a testament to the fundamental optimism that suffused the American character, and its government.

Work began on the Transcontinental in 1863 and the last “Golden Spike” was driven in 1869 at Promontory Summit, Utah, on May 10. The project was paid for mostly with government bonds, subsidies and land grants.

The majority of labor in the eastern portion of the project was provided by Irish immigrants, and in the west, by Chinese immigrants. Contrary to the belief of some, the Chinese labor force was not slave labor, but paid labor, although they had come to the United States as part of the Coolie slave trade. However, the back-breaking work of laying track across deserts and over mountainous regions was a chance for many Chinese to make some money, and capture their share of the American Dream.

There was much debate prior to construction about what would be best route across the American continent. Some favored and lobbied for a southern route, but a central route was finally selected. There was a huge amount of infighting, politics and intrigue surrounding where the eastern terminus of the First Transcontinental Railroad would be located. Council Bluffs, Iowa/Omaha, Nebraska, basically won out as the eastern terminus. The western terminus was San Francisco.

Interestingly, the completed First Transcontinental Railroad was 1,776 miles long, echoing the 1776 birth date of the nation.

Before the First transcontinental railroad was built, a significant portion of the population and even many engineering experts declared that the project was “impossible,” similar to the way skeptic mocked the idea of landing a man on the moon. The obstacles were many – huge mountain ranges to get past, gigantic tunnels through rock that needed to bored through and deep chasms that needed to be bridged. Remember at the time that there were no such things as bulldozers, heavy machinery or trucks – dynamite had not even been invented until 1867!

It’s a testament to sheer human grit, will and ambition that a rail line crossing the entire nation was built in a time when the vast majority of the work had to be accomplished with shovels, pick axes and back breaking work.

7 Wonders of the Industrial World