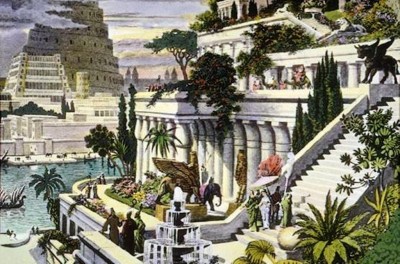 Man has been able to create wonderful things over the course of time. Even in the ancient world, when a lot of today’s technology was not yet available, man explored the world for things he could create. To this day, man continues to create great things through expert craftsmanship. This is one reason why we have the Seven Wonders of the Ancient World. There are many things the ancients did that paved the way into the present age.

Most of these wonders have sparked the curiosity of people all over the world and many have tried to get a glimpse of these historical places. The Hanging Gardens of Babylon is one of the Seven Wonders of the ancient world. It has earned a place of prominence due to the garden’s amazing architecture and history. Here are some facts about this amazing garden.

This hanging garden was found in the city of Babylon which is in modern Iraq. The city of Babylon was considered to be the capital of Mesopotamian empires in the ancient times. There are a lot of discussions when it comes to the location of the Hanging Gardens, some say that it never truly existed since Herodotus failed to mention it in his description of ancient Babylon.

Other historians say that the garden was located on the Euphrates river banks while recent studies have shown that it was actually built near the river Tigris which is located in the city of Nineveh.

A Labor of Love

The Hanging Gardens were built by King Nebuchadnezzar II for his wife, Amytis of Media. The two were married to bring together their empires in alliance. It was said that the king built these beautiful garden to console his wife who was homesick. The garden was built to remind her of the mountains and the beautiful scenery of her home.

The garden was said to accommodate luscious plants and trees that helped create a wonderful home for Amytis. This gracious act of the king was truly something that surpassed the expectations of his wife.

Name of the Garden

The Hanging Garden got its name from the Greek word “kremastos” and also the word “pensilis” from Latin which meant “overhanging.” It was believed that this beautiful garden had its plants hanging or suspended in air but this was not the case. Terraces and balconies were the main thing highlights of this garden and the plants were simply built to overhang upon these structures. It was built to imitate the structure of a mountain that had every single component of nature.

This royal garden was built around 600 BC and was destroyed due to an earthquake in the 2nd century BC. There are still many claims that this beautiful garden may have not existed but a lot of past historians were able to describe it in details.

Experts have tried their best to locate the ruins of this amazing garden but since the structure was made of mud brick, it may be concluded that it was washed away through the centuries. This ancient wonder of the world maybe gone for us to actually gaze upon but the Hanging Gardens of Babylon will still be a great way to remember how ingenious man was even in the ancient times.