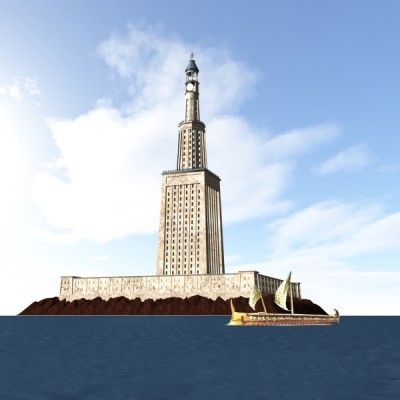 The Lighthouse of Alexandria is sometimes referred to as the Pharos of Alexandria. It was a tower erected between 280 and 247 BC on the island of Pharos in Alexandria, Egypt. Its main objective was to help guide mariners into the Alexandria harbor at night. Having an estimated height of between 393 and 450 feet, the lighthouse was one of the highest man made buildings in the world for hundreds of years. It became one of the Seven Wonders of the Ancient World.

Pharos was a small island located off the coastline of Alexandria. It is said the inhabitants of Pharos would not allow salvage attempts for any ship that ran aground or wrecked off its coastline. Instead the ships would be plundered and destroyed. To help prevent this problem, Ptolemy Soter the King of Egypt, ordered that the lighthouse be built to help sailors navigate the tricky entrance into the Alexandria harbor and avoid the Island of Pharos.

The lighthouse complex was connected to the mainland by a giant causeway known as the Heptastadion, which consequently created one side of the harbor.

Construction of the lighthouse was completed in the 3rd century BC. Shortly after Alexander the Great died, Ptolemy Soter declared himself king in 305 BC. He commanded that the lighthouse be built. However, the construction was not finished until the reign of his son Ptolemy Philadelphos.

The base of the giant lighthouse was constructed mainly from massive blocks of light-colored stone. The lighthouse tower was comprised of three levels: a lower rectangular section having a single central foundation, an octagonal mid-section, and circular top level. At the top of the lighthouse was a mirror which reflected sunlight throughout the day, and a fire was lit during the night.

A statue of Triton, son of Poseidon the Greek god Of The Sea, was stationed at each of the four corners of the lighthouse. And a statue of Poseidon was placed on top of the tower. The huge stone blocks of the base were locked together and sealed using molten lead. This helped to resist the pounding waves. It was reported that in early times the light from the lighthouse could be seen from a distance of up to 29 miles away.

Following the Muslim invasion of Egypt, the pinnacle of the Lighthouse of Alexandria purportedly was turned into a mosque. By this time the beacon was no longer functioning. The lighthouse continued this way until its ultimate deterioration sometime in the 14th century.

Remains of the lighthouse were discovered in 1994 on the floor of Alexandria’s Harbor. A few of these ruins were brought up and were on display at the harbor in 1995. Recent satellite photos suggest more remains may still lie at the bottom of the harbor.