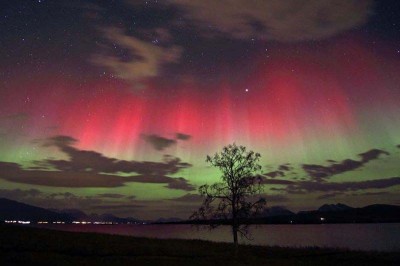 Photo by: Frank Olsen, CC
► Part of the 7 Wonders of the Natural World

The Northern Lights, or Aurora Borealis, are natural lights that glow and flicker and sway in the sky in the upper part of the northern hemisphere at night. A similar light can be found in the southern hemisphere and it is called the Aurora Australis. Both types of light occur for much the same reason. The aurora borealis is named after two Greek gods. Aurora was the goddess of the dawn and Boreas was the god of the north wind. Before it was known how the Northern Lights came about, they were considered divine messages.

The Northern Lights occur when protons and electrons are propelled from the sun and strike the upper atmosphere of the earth. This stream of particles, or plasma, is called the solar wind. The earth’s magnetic field bends the particles toward the magnetic poles and as they move they strike the atmospheric particles. This causes them to change their electrical charge and to glow the way charged particles would glow in a fluorescent light bulb. The earth is not the only planet to have auroras. Other planets with magnetic fields also have them.

The Northern Lights can usually be seen in the far north, but they have been seen as far south as Mexico. Most incidences of the Northern Lights occur in September and October and then a few months later in March and April.

The Northern Lights take place about 70 miles above the surface of the earth and can go as high as a few hundred miles up. Some can extend for hundreds of miles in length and the most common color associated with them is green. The green color is the result of atomic oxygen. The second most observed color is red and this is caused by molecular oxygen and nitrogen.

The Northern Lights can be discrete or diffuse. If they are diffuse, they might not be visible except as a vague glow. If they are discrete, they can be seen as waves, swirls, arcs or curtains. They can be just visible or so brilliant a person can read by them. The Northern Lights can only be seen at night because the sun washes them out in the daytime.

7 Wonders of the Natural World

One thought on “Northern Lights”