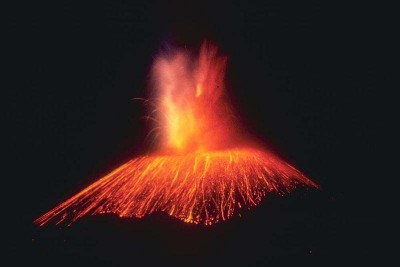 Photo by: R.E. Wilcox, CC
► Part of the 7 Wonders of the Natural World

Parícutin is also called Volcán de Parícutin and is found in Mexico, about two hundred miles from Mexico City. This cinder cone volcano is considered one of the Seven Natural Wonders of the World. The volcano is quite unique because its creation to extinction has been witnessed and studied by people.

It is one section of the Michoacán-Guanajuato, which is a volcanic field that covers a large part of western central Mexico. Since 1952, this volcano has not experienced any eruptions. The volcano grew very quickly and reached seventy-five percent of its size in its first year.

History of the Volcano

Loud rumbling noises that sounded like thunder were noticed by people living near the Parícutin village three weeks prior to the first eruption. In Actuality, the sounds were very deep earthquakes. This volcano started as a small fissure inside a field of corn that was owned by a local farmer in February of 1943. The farmer and his wife observed the first eruption of stones and ash first-hand when they were burning shrubs in the cornfield.

In only one week it grew very quickly, about five stories high. In one month, people in distant areas could see it. The majority of Parícutin’s growth took place during the first year, when it was in its explosive pyroclastic phase. The villages of San Juan Parangaricutiro and Parícutin were buried in ash and lava. Most of the residents had to move to nearby vacant land. There were no deaths caused by the lava flow, but three people died due to lightning strikes that were caused by the volcano’s eruptions.

After this first year phase, Parícutin was over one thousand feet tall. During the following eight years it continued to erupt. Most of the eruptions were relatively quiet and the lava scorched about twenty-five square kilometers of the surrounding land. This volcano’s activity declined gradually in that period of time. However, in the last five to six months there were more violent eruptions that occurred regularly. In 1949, following one of its major eruptions, nearly one thousand people died.

In 1952, the eruptions ended and the volcano became dormant after reaching its final height. Like the majority of cinder cones, this volcano is monogenetic. This means it will not erupt any more. Although, new eruptions many occur in different parts of the overall volcanic field.

Volcanism is very much a part of Mexico’s landscape. Parícutin is the youngest out of fourteen hundred volcanic vents which exist in North America and Mexico. It belongs to the Volcanic Axis, also called the Transversal, which is a seven hundred mile line of various volcanoes. They run in an east to west direction across the southern part of Mexico. Its volcanic explosions were categorized as Strombolian eruptions which consist of basaltic lava that exploded from just one vent.

It is a twelve mile journey to reach the top area of this volcano. This can be done by horseback or by a strenuous hike. Traveling to the top is one of the best ways to see it because visitors will get a number of great views of their surroundings as they go up to the top.

7 Wonders of the Natural World