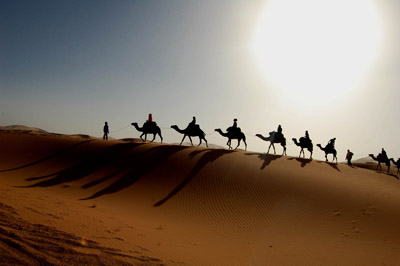 View of Camels at the Sahara Desert
Photo by: bachmont, Creative Commons

The Sahara Desert is the largest and hottest desert in the world. Temperatures can reach as high as 57.7 degrees Celsius, or 135.8 degrees Fahrenheit. It is spread over more than 9,000,000 square km (3,630,000 square miles) as it covers most of North Africa and is as big as the United States. Scientists, however, say this desert expands and shrinks over time. In fact, records show that the Sahara Desert grows southward by about 48 km each year.

The desert starts at the Red Sea, spreads across the Mediterranean, and even over to the Atlantic Ocean. It touches 12 African nations, including Egypt, Chad, Algeria, Eritrea, Libya, Morocco, Niger, Mauritania, Mali, Sudan, Western Sahara, and Tunisia.

Life in the Sahara Desert can be very difficult to sustain due to its climate. It receives less than three inches of rain every year. Rainfall can range from twice in one week to an extreme of no rainfall over the next three years. Oases are scattered throughout this desert. However, the size of the desert makes it difficult to trace where they are located.

Dunes throughout the desert can measure as high as 600 feet. The typical animals found here include domestic camels and goats. As far as the wildlife is concerned, it is common to see scorpions, monitor lizards, sand vipers, wild dogs, ostriches, cheetahs and more. The only types of birds that are visible are African Silver Bills and Black-throated Firefinch.

16 thoughts on “Sahara Desert: Hottest Desert in the World”