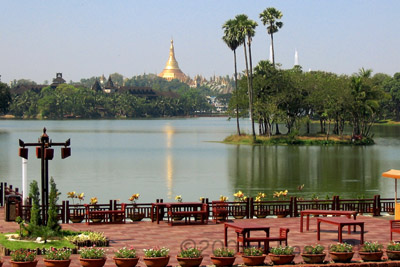 View of Lake Yangon with Shwedagon Pagoda in the background
Photo by: antwerpenR, Creative Commons

The Shwedagon Pagoda, also called the Golden Pagoda, is found in Yangon, Myanmar, just west of the Kandawgyi Lake on the Singuttara Hill. The exact height of the Stupa is 321.5 feet and legend states that it was built more than 2,500 years ago, probably during the time of Buddha. But since it was completed, it has been damaged and even destroyed several times by earthquakes and other natural disasters. The initial reason for building the Shwedagon Pagoda was to create a shelter for several strands of Buddha’s hair. Today, the Burmese consider this pagoda to be the most religious one in the region.

One reason why the Shwedagon is so special is because its spire is made up of a thick layer of gold along with thousands of diamonds, rubies, and precious gems embedded in it. The residents of Myanmar contributed gold to the structure to ensure that would be properly maintained. That practice started when the queen of Shin Sawbu donated gold that was equal to her own weight to the building project.

Visitors can access the Shwedagon Pagoda from all four sides of the hill, but they must remove their shoes before stepping inside. On the east and south sides, one can see vendors selling different kinds of items like the flags, books, and images of Buddha. A pair of lions guards the entrance to the Shrine.

10 thoughts on “Shwedagon Pagoda in Yangon”