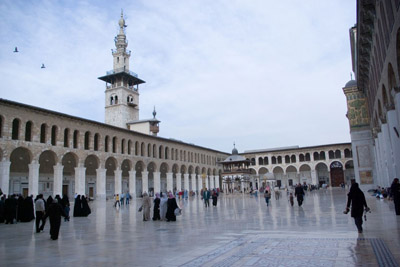 The Umayyad Mosque in Damascus, Syria, is one of the oldest and largest mosques in the world. Sometimes referred to as the Grand Mosque of Damascus, it is known for its intricate architectural beauty with elegant color combinations that are accentuated by the lighting.

One of the features of the Umayyad Mosque is the tomb of Saladin, which stands in a garden that is adjacent to the wall of the mosque. This is the final resting place of Kurdish Ayyubid Sultan Saladin. The mosque also holds a memorial that may contain the head of John the Baptist, who is honored as a great prophet and preacher by both Christians and Muslims.

Damascus is one of the oldest colonized cities in the world and the mosques that are located on the land in that city are considered especially sacred. On the same ground where the Umayyad Mosque stands today was once a temple that was dedicated to Hadad, an idol from the Aramaean era around 1000 BC. While the Romans ruled the city, they built a temple on the site and dedicated it to the god Jupiter. Around the 4th century, the site became a Christian church.

The Muslims took over Damascus in 636 and purchased the church from the Christians before demolishing it and building the mosque that stands there today. The Christians and Muslim pilgrims now share the building for their religious practices and rituals.

10 thoughts on “Umayyad Mosque in Damascus”