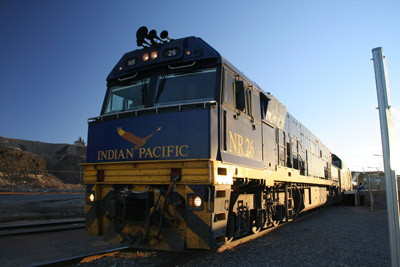 Embarking on a train journey with a view of the lush wildlife and savannah is a treat made exclusive for a traveler’s delight. Indian Pacific is an extraordinary rail service operated by the Great Southern Railway of Australia. Traveling twice a week, the train crosses borders of three states, tours the vast continent of Australia and let’s you cross two oceans in a single journey, all within the longest straight railway track ever present in the world. A journey that takes 65 hours on board, the train travels an overwhelming 4352 kilometers, starting from Perth to Adelaide down to Australia’s capital, Canberra, and back.

The Indian Pacific is a great route for people who favor speed and comfort while exploring the beautiful scenery. The National Geographic-like episode presenting the natural outback is a luxury given to the passengers. Crossing the continent provides a spectacular view of Australia’s landscapes ranging from the Blue Mountains, the empty Nullarbor Plain, and back to the modern cosmopolitan cities.

The train also offers stops in between the journeys for people to stretch their legs while enjoying some sightseeing. The Indian Pacific will stop allowing passengers to visit the Broken Hills, Kalgoorlie, which is a gold mining area, and Adelaide.

The rail service offers different facilities and services for passenger’s comforts. Divided into three classes, it’s very similar to an airline service. The Platinum Service which is the highest service provides the finest quality of travel. It is followed by the Gold Kangaroo or the service compared to the business class of airlines. The last one is the Red Kangaroo service, the least expensive service offered by the train. All includes a restaurant car, with sleeping rooms for the two higher classes. With its Class A travel facilities and the privilege of touring the outback, the city and the two oceans, no wonder the Indian Pacific is dabbed as one of the world’s greatest journey.