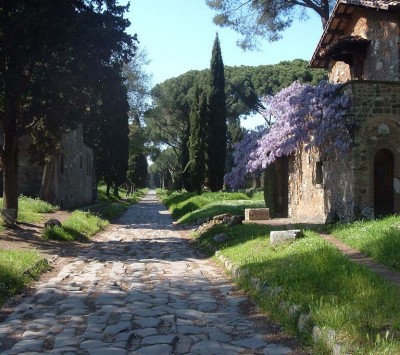 Via Appia Antica, or the Appian Way as its commonly known, is the oldest and arguably most important Roman road. The Appian Way was the most strategically important road leading out of the City. It was initially built in the year 312 BC and was the main project for Appius Caecus who was the Rome censor at that time. Appius Claudius was known all over Rome for his audacious public works, which were all geared towards making the lives of the Roman people easier. The road eventually stretched stretch from the city of Rome to Brindisi seaport city located in southwest Italy. The road travelled through the Pontine Marshes and the Apian Hills till it reached Terracina town. The road’s main purpose was to provide a quick route for the movement of troops.

Appian Way was constructed using very advanced processes. Before its construction, valleys were filled, tall heights were flattened and bridges across river were constructed. These were done in order to make the road as straight as possible.

The road initially started out as a flat dirt surface on which small stones and mortar were laid. After that, they placed gravel and topped it with a series of interlocking stones which provided a relatively level surface for people traveling along Via Appia. It is said the stones stuck together extremely well to the extent that you could not distinguish the joints in the road. However, the surface today is quite rough because most of the cement was eroded over time. Drainage ditches were also made on either sides of the Appian Way to prevent it from being flooded.

The Appian Way started at Circus Maximus and passed along the Aurelian wall and the Caracalla baths. After leaving Rome, Appian Way traveled through Appian Mountains to Terracina town. From there, it followed the west coast all the way to Capua city, making the road approximately 130 miles long. Appian Way achieved its main purpose by assisting the Roman troops to move their military supplies whenever they urgently needed them. This is what led to the defeat of the Samnites by the Romans. Over the next couple of years, the road was expanded and it finally reached Brindisi city on the southeast coast of Italy. This marked the completion of the 350 mile road known today.

Several interesting historical sites can be seen along the Appian Way, most of which are in close proximity to the city of Rome. The first site from the city is the Church of Domine Quo Vadis. This is the church that is believed to have been the place where Peter had the vision of Christ.

Since people were not allowed to bury their dead within the city, several were instead buried along roads that led out of the city. There are entrances to the city’s catacombs along Appian Way. The most famous ones are those of San Callisto and San Sebastiano. During the worst period of persecution, Christians not only laid their dead to rest at the Catacombs but they also used them as a meeting place. The Catacombs stretch for miles and are open to the public on guided tours led by the local monks and priests. Visitors can see samples of early Christian art and ancient burial niches.

Most of the important Roman people constructed tombs for their families along the road. The shapes of the tombs varied from tiny temples to pyramids. Some of these Tombs can still be seen today. One of the major sites located close to the City is the Circus of Maxentius. Finding these ancient sites is not difficult because there are signs along the road.