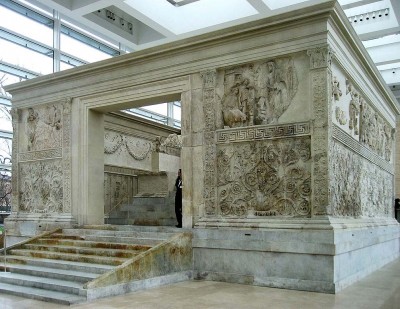 The Ara Pacis is an altar to the ancient Roman goddess of peace in Rome, Italy. It was constructed in the last years of the first century BC after being authorized by the Senate in 13 BC. The intention was that the altar should represent the civil religion of Roman society. It also commemorated the return to Rome of Augustus, who had spent several years campaigning in Gaul and Spain.

The full name of the altar was Ara Pacis Augustae, thereby associating Augustus directly with the establishment of peace across the Roman world. This peace, which became known as the Pax Romana, lasted for around two hundred years. The peace did not begin to break down until the late second century AD. The altar was consecrated in 9 BC and quickly came to be considered as one of the city’s most significant monuments. However, it was neglected after the second century.

The original location of the altar was one mile from the center of Rome, which placed it close to the northern edge of the city. It was part of a complex which was developed by Augustus to hold a number of monuments. The altar stood to the northeast of this complex, which was known as the Campus Martius. Because the area was part of the Tiber’s flood plain, it was often susceptible to silt, something which became a serious problem after a protective wall was built around it in the second century.

The altar itself is fairly small and lies at the very heart of the monument. Its table carries decorations of winged lions. Four walls surround this central altar, each of which was decorated by two-level friezes. These friezes carried scenes representing fertility, prosperity, and peace. These attributes were credited to the military victories that had been won by Augustus. The imposing appearance of the altar, together with its location as part of the monument complex, were intended to demonstrate to Roman citizens that the Julio-Claudians had been both victorious and competent.

White marble was used to sculpt the Ara Pacis, including the scenes carved on the altar. These were classically Roman in style, in that they showed relatively realistic figures, rather than the much more idealized representations that were characteristic of ancient Greek sculptures. The scenes on the altar were fairly standard for their day, depicting a number of scenes of piety and devotion to the gods. Many of them also showed the imperial family, and particularly the emperor himself.

The altar also bore a number of figures of people, especially priests, who were shown wearing crowns of laurel, a traditional Roman symbol of victory. Not all of these reliefs have had their meanings decoded with certainty by modern scholars, and those on the eastern face of the altar have proved to be especially problematic even for specialists. However, the scenes on the northern and southern faces clearly show a procession, which is assumed to be that of July 4, 13 BC, the date on which the Senate had commissioned the altar’s construction.

Although fragments of the altar were discovered in the 16th century, it was another 300 years before any substantial archeology was carried out. After more fragments were found in 1859, Friedrich von Duhn associated them with the Ara Pacis as described in Augustus’s own writings. In 1903, a formal request was sent to the Italian education department, asking for permission to continue excavating the site. However, conditions were so difficult that work was stopped later that year. Only with the advent of the Fascist government of Benito Mussolini did work resume, beginning in 1937.

Mussolini ordered that the altar should be moved to the park he had created in honor of Fascism, associating his rule with that of the ancient emperors. The building he had created to house the altar remained in use for three-quarters of a century. Later, in 2006, a new structure was created to hold the altar. This building was designed by Richard Meier, and was highly controversial. The New York Times branded it a flop, and the mayor of Rome pledged to pull it down. He later softened his stance, agreeing that the building could stay as long as other modifications were made.