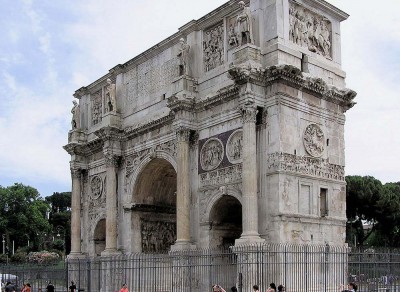 The Arch of Constantine stands between the Roman Forum and the Colosseum in Rome. It is the largest of the three remaining triumphal arches with the Arch of Septimius Severus and the Arch of Titus being the other two. The towering 69 foot arch has been properly preserved and features several different reliefs and fine statues.

Constantine is credited for being the emperor who was able to bring peace to a Rome that had been replete with on and off civil wars for hundreds of years. Constantine gained power in 312 AD by defeating emperor Maxentius in the battle of the Milvian Bridge. He believed that he was victorious because he had received help from the Christian god. This is what led to the end of Christian persecutions and Christianity becoming the official religion of the Roman Empire. He also moved the capital of the Roman Empire from Rome to Constantinople during his reign. The Arch was built for Emperor Constantine by the People of Rome and the Senate in 315 AD in order to commemorate his victory over emperor Maxentius.

The Arch of Constantine is about 85 feet wide and 69 feet high. It has three portals that have been decorated with curved reliefs and sculptures that were taken from older structures. The eight sculptures at the top of the arch were from the Forum of Trajan and are a representation of Dacian warriors whom the Trajans successfully defeated in a war.

The Aurelius panels between the sculptures were taken from monuments that were built for Emperor Marcus Aurelius, the roundels come from emperor Hadrian’s time. The master piece of the Arch of Constantine is the Trajan relief which was divided into four different parts and inserted into the Arch. The relief depicts episodes from the battle against Maxentius. It shows Constantine’s army driving Maxentius’ troops into the Tiber. These decorations stand out from the rest because they lack realism and are of a lower quality compared to the ones from the era of Trajan and Hadrian. This showed that the artistic level had declined during the continual civil wars over the previous century and was symbolic of the Roman Empire’s decline.

Rome was never the same after Constantine’s reign. Rome eventually developed into a different type of empire, one headed by the Local Roman Bishop who is today known as the Pope. This new empire led to the domination of Christianity in Europe from the middle ages to the Enlightenment. This domination is what fueled the age of exploration and continues to hold vast power to this very day.

Travelers can examine the Arch of Constantine for a few minutes en route between the back entrance to the Colosseum and the forum. However, if you would like a more detailed look at the arch then you should instead consider booking a private guided tour that is inclusive of a stop at the Arch. Since there are a lot of inscriptions and decorations that represent different aspects of history, you should look for a guide who is familiar with the history of Ancient Rome.