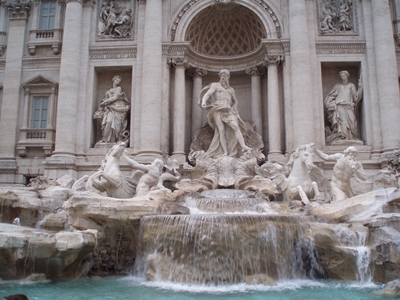 Your roman holiday will not be complete without first taking a stroll down at the Quirinale district and tossing a coin or two at the Trevi fountain. A structural masterpiece that has been regaled to be the most famous in Italy used to be just another regular fountain on display. It wasn’t until Hollywood took notice of its potential and featured it in its love story classics such as “La Dolce Vita” and “Three Coins in the Fountain” that visitors started flocking to the scene. Today, it’s alive with the spirit of lovers, local and foreign alike, with the hope of finding their own eternal love, just like in the movies.

The Trevi fountain is most glorious and magnificent to see during the night when it is strategically lighted and the image of Neptune, the god of the sea, on his chariot comes to you in a very authoritative stance that commands both power and subtlety. Locals say that the fountain is a reflection of the moods of the seas which could transcend between calmness and restlessness all at the same time. And don’t forget to throw a coin into the water in a way that makes Trevi fountain unique and different from all the other fountains in Italy.

With your back facing the fountain, throw the coin over your shoulder and hope that it safely lands where it’s supposed to. Legend has it, that anyone who throws a coin into the fountain this way is assured to return back to the magnificent city someday.

The Trevi fountain is a representation of the classic Rome and the new thriving city that it is today. So make it a point to pass by whenever you find yourself in Rome. You’ll simply be overwhelmed with the feelings of magic, love and hop that surround the place.

One thought on “Trevi Fountain”