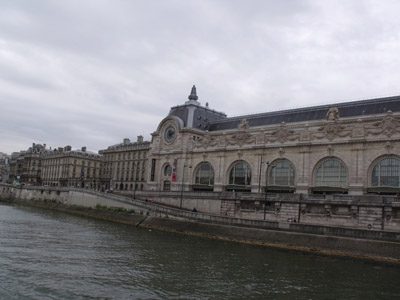 Want to be awed by fabulous art in a museum that stands on what used to be a train station? The Museum d’Orsay or Musée d’ Orsay, situated in the old Gare d’Orsay, is one of the must-see spots if you’re in France. Besides showcasing to appreciative crowds the astounding Impressionist paintings by the masters, furniture, photographs, and 19th century sculptures & curios, Musée d’ Orsay is an architectural marvel.

The stone façade of the former Paris Gare d’Orsay was created by architect Victor Laloux. The train station was completed in 1900 in time for a world fair held in Paris. Decades years later, the train station became dilapidated and was used as a backdrop for celebrated movies such as Franz Kafka’s The Trial. During the late 1970s, the railway station was converted into a museum.

Even with the conversion of Gare d’Orsay into the Musee d’ Orsay, it retained Laloux’s architectural vision but reinterpreted the structure’s new function. The splendid art nouveau glass awning was turned into the museum entrance. In the 1980s, additional floor area was added to be able to house vast art collections. Today, the Orsay museum, which houses thousands of art works, is among the most popular locations that people from all over the world come to see. It’s an amazing architectural showcase. It even has a glass walkway (part of the original train station), and also has a restaurant-café, auditorium, bookstore, and gift shop. The interior design of the museum, which Italian designer Gae Aulenti spearheaded, sparked some controversy. Detractors have decried some of the museum’s features as “mussolinian” in terms of style. Whether you’re an art aficionado who looks forward to viewing French masterpieces created between 1848 and 1915, or someone who loves seeing architectural wonders and enjoying a piece of history, the Musee d Orsay is well worth including in your itinerary.