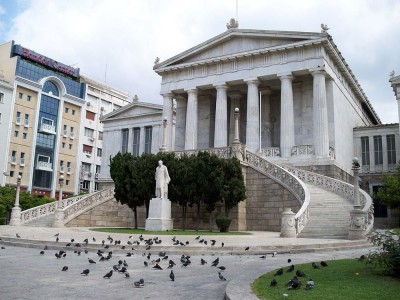 The National Library of Greece is the country’s main center for academic study, and is one of a group of three buildings in central Athens designed in the neo-classical style. Founded by Ioannis Kapodistrias, it is the largest and most important library in the country. Its extensive collections include tens of thousands of priceless artifacts, many of them dating back to classical times.

A plan to give Greece a modern national library was first mooted in the early 19th century, when Johann Jakob Mayer, a Swiss enthusiast for all things Greek, put forward the idea in the Greek Chronicles, the newspaper he owned. The proposal came at a time when the movement for Greek independence from the Ottoman Empire was gathering pace. This was supported both by Greeks themselves and by many foreigners such as the British poet Lord Byron.

The plan was given official support by Ioannis Kapodistrias’s government later in the decade, and in 1829 the library opened for business. The building initially chosen to house the library, originally an orphanage on an island in the Saronic Gulf, was also employed for other related activities. These included a number of museums, print shops and even schools. By late 1830, the library had amassed more than a thousand books from a variety of sources.

Move to the Capital

The library was moved to Athens in 1834, at first being housed in an ancient Roman bath house and afterward in a church close to the city’s cathedral. Meanwhile, the size of its collection grew considerably. Almost two thousand books were bought from a range of privately held collections, while thousands more were given to the organization by prominent philanthropists and academics such as Markos Renieris.

The library received a major boost in 1842, when it joined forces with the library of Athens University; for some years, the main collection was housed at the university. Donations of books and other materials continued, including a large number of valuable books from elsewhere in Europe. In 1866, a formal merger of the public and university libraries took place and, as a result of the granting of a royal charter, the organization became known as the National Library of Greece.

The present building was constructed in 1888, although the library did not fully transfer there until 1903. The extent of the National Library’s holdings means that some items are now held in one of two newer buildings. One of the most important collections comprises an extensive set of Greek manuscripts, more than four thousand in total, some of which date back to the early Byzantine era. There is also a large archive dedicated to the Greek Revolution which brought about the country’s independence in 1832.

In recent years, the limitations of the 19th-century library building have become increasingly apparent, and plans have been made for the majority of its holdings to be transferred to a new building. The new location would be situated on the delta of the Phaleron Bay, close to the site used for the equestrian events at the 2004 Olympics. Construction is underway at the site, and the new building is expected to open around 2015. Meanwhile, the old library in downtown Athens remains in full operation.