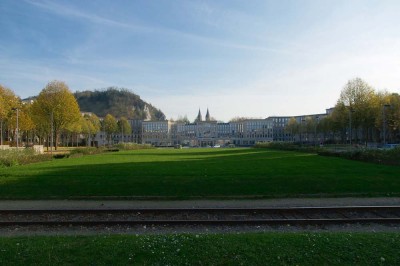 Located in Paris, Champ de Mars is a vast green stretch of land that is bordered by beautiful gardens. This is a popular tourist attraction because it provides an uninterrupted view of the Eiffel Tower. This park can be found in the seventh administrative district, between the Siene River and École Militaire. The fields of the park were used by the French military in the past as marching grounds. This is why the park is named after the Roman god of war.

During the 16th and 17th century, the area where the park that is now was a field used for growing fruits and vegetables. This was a flat, open area which Parisians called Grenelle. This vast land was reserved for marketers to grow their produce. However, the ground in Grenelle was not an ideal or fertile land to grow crops. Still, locals would utilize the land and grow fruits, vegetables and flowers to sell in the market.

The construction of a military training ground, called the École Militaire, was commissioned by Ange-Jacques Gabriel during 1765. Originally, the training grounds were to be built south of the school where present day place de Fontenoy is located. However, the choice to build an esplanade somewhere north of the school changed these plans. The result was that the military training drills were conducted on Grenelle. The park was then named Champ de Mars and was closed off to the public. Many young men trained for war on these grounds, including Napoleon Bonaparte, who was a student during 1784 and 1785. The park would hold as many as 10,000 men at a time during training drills.

During the end of the 18th Century, military training on the park ceased, later the grounds were used for celebrations and festivals. The fence that surrounded the perimeter of the park was taken down and the area was open for the public. The first big event was the Celebration of the Federation, this was held during 1790. The festivities were held because King Louis XVI accepted the new written constitution. Another big celebration was when the Duke of Orleans had his wedding ceremony on the park grounds during 1837. The site later became a horse track, and was used to hold many exhibitions. The Exposition Universelle of 1889 was held here, which later lead to the construction of the Eiffel Tower.

When the park was used as training grounds, it originally measured over 100 acres. However, when the park was redesigned by architect Jean-Camille Fromigé, the size was reduced to about 60 acres. This was done for the World Exposition during 1890. The park is the center of many tourist attractions, including the iconic Eiffel Tower and the new Monument to Peace. Visitors can enjoy picnics on the vast green field or lounge near the many ponds. There are a number of playgrounds where children can run about and there is ample space for a variety of activities.