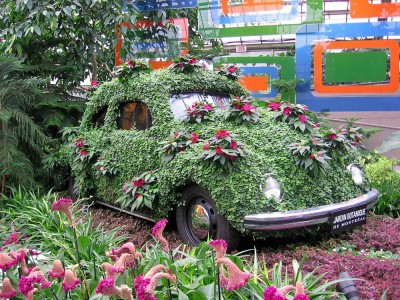 The Montreal Botanical Garden is one of the most significant gardens in Canada. Spread across an area of almost 200 acres, it contains a variety of themed gardens, as well as hothouses and greenhouses. In 2008, the richness and diversity of its collections gained it recognition as a National Historic Site. Despite its location near the center of Montreal, the garden is known for its calm atmosphere.

The garden lies opposite the Olympic Stadium used for the 1976 Games. Its greenhouses are open throughout the year, and in the early spring a display of free-flying butterflies usually draws large crowds. However, because of the harsh Canadian winters, the outdoor gardens are largely empty between November and April. Each of the individual gardens contained within the complex is used to illustrate a particular theme.

The campaign to set up a botanical garden in Montreal began in the early 20th century. The effort was led by Brother Marie-Victorin, but it was not until 1931 that the garden was actually founded. Despite being built during the worst of the Great Depression, the city mayor, Camillien Houde, was determined that the garden should be attractively designed. To this end, the city employed Henry Teuscher to devise the layout of the grounds. Lucien F. Kéroack was chosen to work on the administration block, which is in the Art Deco style.

Among the most popular areas is the Japanese Garden. As well as plants of Japanese origin, this part contains a building in the country’s classic style where traditional tea ceremonies are performed every summer. Classes on arts from Japan, such as flower arranging, are sometimes offered. The garden contains a pond in which koi carp swim, and feeding the fish is popular with tourists. More somberly, each August a Peace Bell is tolled in memory of those who died in the 1945 atomic bomb attack on Hiroshima. The bell was itself made in that city.

Among the Canadian-themed gardens is one dedicated to the country’s first people. This includes examples of Native American structures and artworks, as well as a number of totem poles. Trees with strong associations to Canada, such as pine and maple, have been planted along its pathways. Meanwhile, the Alpine Garden is situated in a rocky, hilly part of the site and specializes in the small plants and flowers which thrive in areas such as the Rocky Mountains and the Alps themselves. The Chinese Garden nearby is the largest of its kind outside of China itself.

The botanical garden also has an educating role, both to its general visitors and to horticulture students. It also has a conservation role in protecting plants which have become endangered through encroaching development or habitat loss. An institution devoted to botanical research is situated here, as well as an insect house. The Botanical Garden is not known particularly for its fauna, although it has significant populations of herons and turtles. At the rose garden’s entrance is the Lion de la Feuillée, a sculpture which was a gift from the French city of Lyon in 1992.