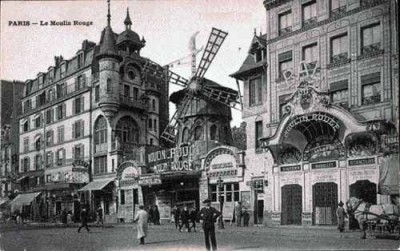 The Moulin Rouge was an incredibly popular venture at the time that it was opened. Owners Joseph Oller and Charles Zidler said that it was the first “Palace for women.” The venue did achieve great popularity after opening in 1889. It was well-known in Paris to be a place where men could go for entertainment and women would perform dance moves for them along with other services. The stories that came from within the Moulin Rouge were alarming and they caused a huge outcry from an outraged public.

Inside the Moulin Rouge

The use of opium and absinthe by the infamous celebrities of the time were partly what made the venue so popular, but it did not always remain this way. Not a lot is known about what happened in this venue from firsthand accounts, but the Moulin Rouge has become a huge part of Parisian history.

Unlike in Hollywood depictions of the Moulin Rouge, it is not true that women had to sell their bodies to make a living. They simply had to make conversation, entertain men and be the life and soul of the party. They were very skilled at the art of seduction and often formed long-lasting relationships with the European elite. They were also considered celebrities and disliked by many people. The press followed their every movement. This certainly added to the perception that many Parisians already had of these women and this venue.

The Moulin Rouge was built in the red light district of Paris. The facade was decorated with glittering electric lights, which were a novelty at the time, with a huge red windmill at the very front of the building. The red windmill was designed to indicate the history of Montmarte, a village that once had many windmills in it. A castle was built in a gothic style right next to the windmill.

The Moulin Rouge transformed over the years, from an unofficial brothel into a fashionable music hall. The venue slowly lost its reputation as a place of ill repute and patrons from everywhere would go to the shows. The dancing was impressive as the dancers were athletic and skilled. The Moulin Rouge went through many transformations over the years as it tried to find itself a place in French society. After World War I, there were many musicals and cabaret shows. However, their main show runner’s death seemed to also signify the death of the Music Hall, and by extension, the Moulin Rouge. It was turned into a cinema for a bit and revitalized in the 1950’s with a diner-spectacle show. Currently, the Moulin Rouge still puts on shows for patrons. They are extravagant, with dancers wearing huge, attractive costumes.