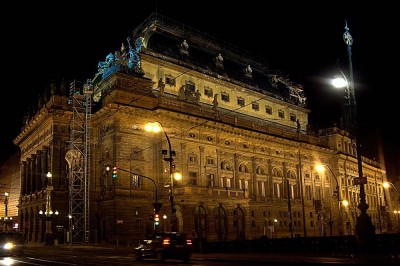 The National Theatre in Prague is a neo-Renaissance building that was designed in the last part of the nineteenth century. It is considered by many to be a national monument because it not only symbolizes Czech culture, but also Czech independence.

The National Theatre has splendid artistic tradition that was created and preserved by some of the most notable citizens in Czech society. The artistic tradition made it easier to maintain and also develop many important attributes of the Czech language, as well as a sense of the distinctive Czech dramatic and musical way of thinking.

These days, the National Theatre is made up of three different artistic ensembles which include ballet, opera and drama. Each one alternates their theatrical performances in the various theatres. Each of the three theatre organizations decide on their repertoire from classical works and also from new works by local authors.

All through the middle part of the nineteenth century, Prague was controlled by Austrian rule. The citizens of Prague made plans to build a magnificent theatre that would become a shining example of Czech culture. But, the Austrian government refused to spend money on the development of the theatre. This resulted in a very successful appeal to all citizens in the country to contribute to the building fund. Many people were very happy to make contributions since most people wanted to be included in the creation of this important national project. In 1865, construction for the theatre started, and sixteen years later it was finished in 1881.

Design of the National Theatre

Josef Zítek, a Czech architect, was in charge of the building’s design which many consider to be a neo-Renaissance architecture masterpiece. Since Zítek had been educated at an architectural school in Vienna, he added some Italianate elements of design. He had some of the most important sculptors and painters of his generation help with the process. As a result, the theatre building has become a symbolic representation of the nation’s culture during a period when there had been increasing bitterness towards the Austrian rulers.

Just a few days prior to the planned opening on August 12, 1881, disaster struck when a fire broke out in the building. After the fire ended, the outer walls were the only parts of the building that remained. Many believe that the fire was accidentally started on the roof when workers were finishing that area of the building. It only took about six weeks to accumulate enough funds to start the rebuilding process for the theatre. In 1883, it finally opened with Smetana’s Libuše, an opera that had been especially created for the National Theatre’s opening. The reconstruction resulted in some changes of the original design and the theatre was expanded.

The National Theatre shut down for renovations in 1977, and during this time a contemporary glass addition, called the New Scene, was built. In 1983, the theatre reopened with Libuše, one hundred years following the original opening. Today, the theatre has a horse drawn chariot and ten exterior Bohuslav Schnirch sculptures, ten other exterior works of art by Antonín Wagner, Max Verich stone pieces and an interior pediment sculpture by Schnirch.