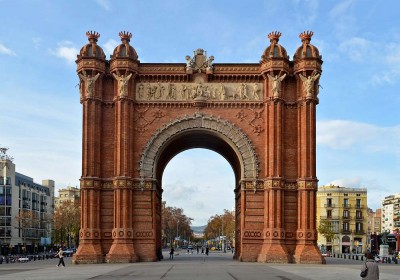 The Arc de Triomf was built in 1888 for the Exposición Universal de Barcelona. It was created in the Mudéjar style and has reddish brickwork. Josep Vilaseca, a Modernista architect, designed the arch which features many reliefs and statues. The arch was built as an entrance to the exposition being held at the Parc de la Ciutadella. It is one of Barcelona’s most iconic landmarks.

The style of this colorful arch stands apart from many other famous ones, such as the Arc de Triomphe, which is located in Paris, France. This is because it has the Mudéjar style brickwork that is very beautiful and striking. The origin of this design is from Moorish architecture. This architectural design was very much in style during this time period.

The arch is 98 feet high and decorated with ceramic tiles and beautiful stone carvings. Josep Reynés created the entrance frieze which depicts the city welcoming its visitors from around the world. Josep Llimona designed the back side that shows an award ceremony. A frieze that is located on the right side was designed by Antoni Vilanova, and it represents agriculture, trade and industry. On the left side is a frieze which was produced by Torcuato Tasso, and it symbolizes the arts and trade.

The Arc de Triomf is adorned with Spain’s coat of arms which is very large and is made of carved stone. Each side has a roaring lion and the top area has a crown. On the arch’s contour, visitors can see the emblems from all of the forty-nine provinces in Spain. The main emblem on the keystone represents the city of Barcelona, and it is somewhat bigger. Additionally, this arch is decorated with twelve distinct statues of women that symbolize fame.