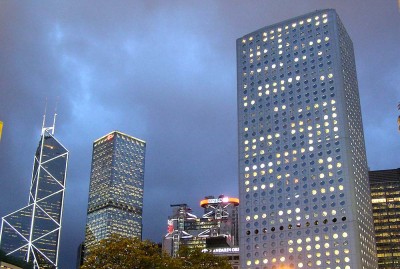 The Jardine House is an unique building in Hong Kong. It was built in the early 1970’s and was the tallest skyscraper in Asia at that time. It is renowned for its round windows. This building is one of the structures that is active in Hong Kong’s tourism commission for the Victoria Harbor Lighting Plan. As such it is part of a very impressive production of Symphony of Lights which takes place almost every evening.

Construction of the Jardine House

This structure has fifty-two stories and was completed in only sixteen months. It replaced another building that was only sixteen stories high. It is situated on leased land that is not very far from the popular Star Ferry terminal. Metal lettering was salvaged from the previous Jardine House and made use of in the new lobby.

This office building is connected to two other buildings, the Exchange Square complex and the International Finance Center, by a central elevated walkway. It has been a famous landmark ever since it was built. After it was completed an agreement was made with the government then that no other skyscrapers could be built to the north of it. This was done in order to prevent any views of the water from being blocked.

The Jardine House is 587 feet high. A Hong Kong company, P&T Architects and Engineers, designed the building and they have created other landmark structures in Hong Kong. The round windows are its most apparent unique feature. This building has one thousand and seven hundred windows.

These distinctive windows made it feasible for the building to have a thinner overall structural frame. Its interested to note that engineers said the round windows actually make it more structurally sound compared to typical rectangular windows. Many local people called it the “Porthole Building” and others call it “The House of a Thousand Orifices,” in Chinese.