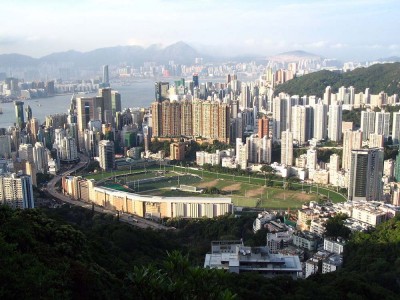 Happy Valley Racecourse is located on Hong Kong Island. Horse racing is very popular in the city and there is another racecourse in Sha Tin. The horse racing season begins in September and runs for ten straight months. Individuals have to be eighteen years or older to place bets.

Tragedy struck on February 26, 1918, when a fire broke out and almost six hundred people died. The fire was a result of the temporary grandstand collapsing, which caused food stalls and bamboo matting to catch fire. This resulted in one of Hong Kong’s highest casualties caused by fire. In 1995, Happy Valley Racecourse was rebuilt, and now is a world-class racing facility.

The Hong Kong Jockey Club uses the track for many horse racing events. Happy Valley races generally occur on Wednesday nights and are open to the general public. The inner field has leisure and sports areas including hockey, football, and rugby fields.

The Archive and Museum

This facility also has four galleries which includes the “Origin of Our Horses.” This gallery has an exhibit of the migration route of horses in the past from the northern area of China to the city. There also is the Shaping Sha Tin gallery and it displays the history of this race track.

The next area is the “Understanding Horses” exhibit and it shows the skeleton of Silver Lining, a Hong Kong Champion horse. Finally, there is the Thematic Exhibition and it offers visitors a look at the Jockey Club’s history. Charitable and community projects are also on display in this gallery. Additionally, the museum has a souvenir shop and a cinema.