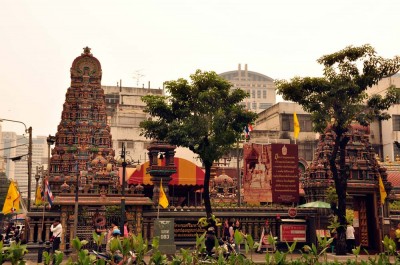 Bangkok is a cosmopolitan city mainly popular for its great shopping experience and vibrant night life. The infinite layers of this city comprise of interesting sights, exotic aromas of Thai food and visual delights. The city has hundreds of interesting temples that have now become religious icons. Mariamman Temple is a famous Hindu temple situated in the heart of Bangkok. The temple was constructed in the 1860’s by Tamil immigrants. Known as “Wat Khaek” by local people, Mariamman is primarily a Hindu temple that displays all the Gods of the Hindu religion. Many of the major Hindu festivals are celebrated in the vicinity of the temple.

Arrestingly flamboyant, Mariamman Temple is an illustrated example of a glorious past. The temple is a typical model of Hindu architecture, built in South Indian Dravidian style. It also blends the architecture of ancient Buddhist temples. The temple has a fascinating design, with colorful statues and shrines situated around the site. The façade is made of precious stones and shining diamonds. There are a lot of brass idols of several gods and goddesses. These include Vishnu, Hanuman, Ganesh, Murugan, Buddha and many more. The Goddess Mariamman statue is situated in the center of the main Garbagraha shrine. The idol looks beautiful and vibrant. The shrines of Ganesh and Murugan are located on either side of Mariamman. The temple is visited by Sri Lankans, Hindus, Punjabis, South Indians and Thai people. Around the temple, one can find a lot of Indian and Thai hotels.

Mariamman Temple is located on Silom road on the corner of Thanon Pon, which is just a 15 minute walk from Chong Nongsi BTS Skytrain station. Tourists can reach the temple by taking bus numbers 115,76, 77, 504,15, 163 and 164. Verify the opening and closing times of the temple before visiting.